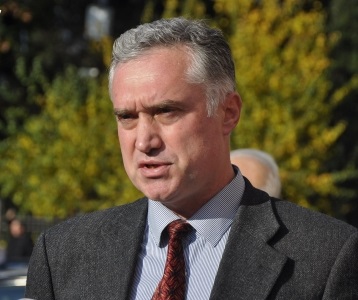 Biometric voter’s lists is something the opposition has been wanting for a long time, said Zviad Dzidziguri, Member of Parliament for the Georgian Dream coalition. (Interpressnews.)

TBILISI, DFWatch–The Georgian Dream coalition promises that there will not be fraud in the upcoming local elections, as the voters’ list is being checked by use of biometric data, which will prevent names from appearing two or more times.

Georgian Dream, both the coalition and the party with the same name, met on Sunday to discuss election issues. Member of Parliament Zviad Dzidziguri told journalists after the meeting that the list is being formed by the use of biometric data, as about 3.7 million photos in the Justice Ministry database are converted into biometric data and this will make it possible to prevent the kind of fraud where the same person votes twice using different names or photos.

He said lists will be printed with photographs.

“This is a long-awaited wish by every opposition party in the past,” he said, adding that the Ministry of Justice will soon present the new lists.

During the session, coalition members discussed the Election Code and other aspects of the upcoming election.

Georgian Dream members said the coalition is starting to prepare for it already.

“We already have opinions about what our election campaign will be like,” Dzidziguri said. “We will discuss the election strategy later and at the moment we don’t know who our candidates will be.”

Georgia will hold local elections in the beginning of June. The exact date is not yet set.