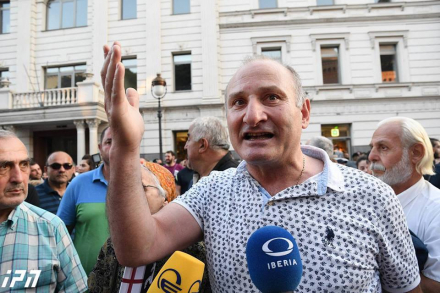 The bill was proposed by Emzar Kvitsiani, a member of parliament for the Alliance of Patriots who has often appeared at far-right rallies like this one in Tbilisi on July 14. (Interpressnews.)

TBILISI, DFWatch–The  parliament in Georgia is to consider a proposal by a far-right group to ban the wearing of burqa and niqab in public.

The bill was proposed by Emzar Kvitsiani, a member of parliament from the socially conservative political party Alliance of Patriots.

The party is often accused of having pro-Russian sentiments, but party members themselves deny this.

Kvitsiani has been seen at several rallies in Tbilisi held by Georgian March, a far-right, anti-LGBT and anti-immigration group.

On Monday, the human rights and civil integration committee held a hearing about the bill, which was introduced to parliament by Kvitsiani but actually prepared by Zviad Tomaradze, a far-right activist who heads a non-profit called Georgia’s Demographic Society 21.

The wearing of niqab and burka makes it impossible to identify a person and therefore poses a threat of terrorism, Emzar Kvitsiani said.

According to the bill, the wearing of burqa and niqab in public places will be punished with a fine of 500 lari (USD 188) the first time, but and 1,500 lari (USD 564) for each consecutive violation. However, the ban will not apply to persons working at diplomatic missions.

Members of the ruling party, Georgian Dream, have said that the bill will require much deliberation, falling short of either condemning or endorsing it, while the opposition criticized the initiative for violating basic human rights.

Instead of banning burqa and niqab specifically, it would be more correct to ban the wearing of full-face veils, said Ramin Idigov, a sheikh in Georgia’s Shia community, at the hearing.

Committee chair Sopio Kiladze said the issue is very sensitive, as it a involves balancing, on the one hand, basic human rights with ‘the state security and the country’s interest’ on the another.

“It is not easy to balance these two issues, and this applies not only to Georgia, this dilemma stands before the whole world, including developed countries that are seen as human rights flagships,” Sopio Kiladze said.

She proposed establishing a working group to handle this and similar religious issues. The parliament will continue debating the bill after New Year, with January 21 as a tentative date for the next hearing.

Niqab and burqa are banned in some European countries, including France, Denmark, Austria, Estonia and Bulgaria, while some states, including predominantly Muslim Azerbaijan and Turkey, prohibit the wearing of full-face veils locally, in certain cities and regions.