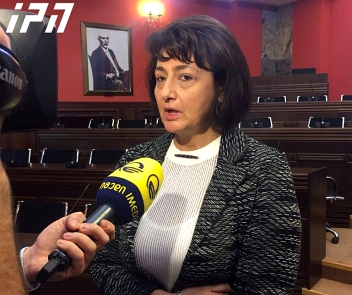 Leader of Alliance of Patriots Nato Chkheidze is worth 51 million lari, according to the report. (Interpressnews.)

TBILISI, DFWatch–41 members of the Georgian parliament are millionaires (in GELs); 37 persons from the Georgian Dream majority and 4 members of two opposition parties, United National Movement and Alliance of Patriots.

There are six millionaire ministers in the GD-led government as well.

These are some of the findings presented on Monday by an organization called Mediatori and the opposition political party New Georgia.

New Georgia was founded by Giorgi Vashadze, a former member of UNM who was deputy justice minister in 2012.

One in every three GD member of parliament are officially millionaires, it was said during the presentation of the study.

A list of MPs and ministers with declared property exceeding 1 million laris ($380,000), is topped by the leader of Alliance of Patriots Nato Chkheidze with 51 million, followed by Shota Saleshashvili of GD (35 mln), and Kakhi Kaladze, first deputy PM (37 mln).