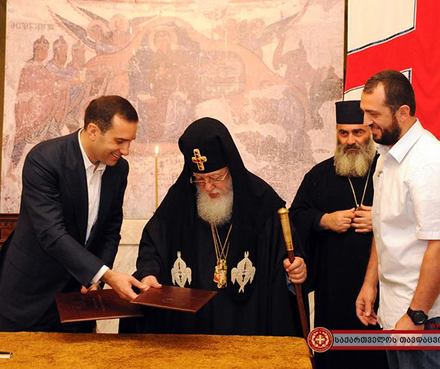 TBILISI, DFWatch–Georgia’s Ministry of Defense on Sunday signed a memorandum with the country’s Orthodox Church.

The agreement was signed at Trinity (Sameba) Cathedral by Defense Minister Irakli Alasania and Patriarch Ilia II and is about ‘spiritual, moral principles and strengthening of patriotism, further understanding military commitment to the country and revival and strengthening of military and patriotic spirit.’

The agreement also foresees cooperation between the Church’s and the Defense Ministry’s various educational institutions, as well as assisting injured people and traumatized military service members in psychological rehabilitation with the help of clerics.

In July, the Ministry of Culture signed an agreement with the Orthodox Church about protection of cultural heritage. It was said then that it was the first document signed between the government and the Church since a constitutional agreement in 2002. https://dfwatch.net/georgia-signs-agreement-with-orthodox-church-about-cultural-heritage-35479