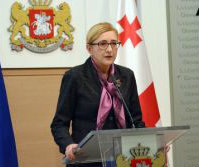 Beruchashvili was a deputy to Foreign Minister Maya Panjikidze, who resigned in protest against the dismissal of Defense Minister Irakli Alasania last week.

All Panjikidze’s deputies resigned the same day, but three of them, including Beruchashvili, decided to return to work after speaking with Prime Minister Garibashvili.

Presenting Georgia’s new top diplomat Tuesday, the PM said Beruchashvili knows ‘what is to be done in foreign policy.’

“She knows perfectly what challenges and goals are ahead of our country,” he said adding that it was important to select a person with the highest qualifications.

“The European choice is choice of Georgian people and our firm will and I am sure Beruchashvili will contribute to achieve this goal,” he underlined continuing that it is important that Beruchashvili used to be deputy foreign minister ‘in different times’ and has worked for Georgia’s integration with Europe for 22 years.

Resigning after the dismissal of Alasania was an ‘emotional solidary misunderstanding’, Beruchashvili explained. She said she only doubted the change of country’s course for ‘a few hours’.

Beruchashvili was deputy foreign minister in 2000-2003 before Mikheil Saakashvili’s government. In 2004-2010, when National Movement was in power, she was first deputy minister for Euro Atlantic integration.

From April, 2013 she was appointed as deputy foreign minister. https://dfwatch.net/ivanishvili-unveils-deputy-ministers-96697

It is still unknown who will replace Alexi Petriashvili, former Minister of Euro and Euro Atlantic integration who also resigned after Alasania’s dismissal.

In the talk show Archevani on Tuesday, Panjikidze said that when she made the decision to resign she didn’t ask any of her deputies to do the same. It was their choice.

She said when Alasania was dismissed everyone expected her to resign which she did. The next day she came to the ministry and spoke about her decision with the others. The next day she and all her deputies resigned. Beruchashvili called her and said that she decided to remain on her post. Panjikidze said she was surprised by this decision, but she also said that she welcomes ‘the promotion of principled people.’