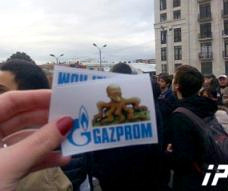 It became known in late September that the Georgian government was in negotiations with the world’s largest extractor of natural gas, the Russian state-owned company Gazprom.

Officials explained that Gazprom was planning to increase its export of gas to Armenia through Georgia and that Georgia might benefit from the increased transit.

About 12 percent of the natural gas consumed in Georgia today comes from the Gazprom transit pipeline, according to figures obtained by DFWatch.

Government critics demand a stop in the negotiations and argue that a if Gazprom is to play a greater role in Georgia’s energy sector, it will give the Kremlin more influence. There have been several demonstrations in Tbilisi with this message.

But the negotiations are continuing. Kaladze has now had three meetings with the director of Gazprom Export.

A group of analysts in Georgia say he is considering increasing the import of Russian gas.

Responding to the criticism, Kaladze said that Georgia revises its contract with Gazprom every year.

“We launched these negotiation long ago. We have had several meetings, but we haven’t reached agreement so far,” he said.

“We are talking about one-year agreement, and it is terrible and incorrect when the so-called experts talk [about] it as some [kind of] tragedy.”

“I wish we gained the same income we used to receive in case of 10 percent natural gas.”

Georgia will not become dependent on Gazprom, he continued.

Later, the energy minister said that Gazprom offers cheaper gas than Socar, Azerbaijan’s state oil company, and by purchasing the gas from Gazprom, Georgia will be able to balance a deficit in supplies from Socar. He did not state any figures but said that the government plans to also have discussions about price with the Azerbaijani supplier.

Wednesday, several non-governmental organizations demanded that the details of the negotiations with Gazprom are made public. The same demand was submitted to parliament in the beginning of November, but to no avail.

The protests against the negotiations continued Thursday with several gatherings under the slogan “No to Gazprom”, which was also printed on stickers handed out to drivers in the street. A larger rally is planned at the government office at 16:00 on Saturday.