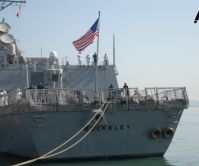 TBILISI, DFWatch–Five days before the inauguration of Giorgi Margvelashvili as new president, he and other members of the current government will join outgoing president Mikheil Saakashvili for an event aboard a U.S. naval ship docked in Batumi.

Also outgoing Prime Minister Bidzina Ivanishvili and his successor Irakli Gharibashvili will attend the event, which is to take place on the USS Mount Whitney, which arrived in Batumi on Monday and will stay for two days.

According to the press office at the US embassy, there is planned a joint exercise for firefighters, and a football match between the ship’s crew and members of the Georgian coast guard, which will start at 14:00 on the stadium on Batumi boulevard.