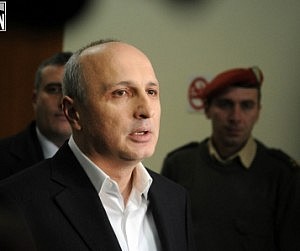 TBILISI, DFWatch–Georgia’s former interior minister Vano Merabishvili, who has been in prison since May 2013, claims a recent ruling by the European Court of Human Rights in Strasbourg will soon lead to his release.

After a two years’ silence, Merabishvili posted a statement on Facebook on Tuesday. His status update was a response to a ruling by the European Court of Human Rights in Strasbourg on June 14, which found that the Georgian government violated the European human rights convention because of the pre-trial detention of Merabishvili.

The court found that his initial detention in May 2013 was justified, but his second remand four months later was in violation of  Article 18 of the European Convention on Human Rights, because it lacked reasonable grounds.

But the Strasbourg court said nothing about the content of the charges against the former iron minister, who many Georgians view as part responsible for the terror regime their country became during the years of UNM dominance.

He was initially arrested on charges of misusing public funds to buy votes, but later also charged with his role in the killing of bank employee Sandro Girgvliani in 2006 and the violent dispersal of peaceful anti-government protesters on May 26, 2011. He denied all charges, but was found guilty. His appeal in the latter case was rejected by the Supreme Court in August 2014.

Tuesday’s message by Merabishvili showed a clear spirit of defiance against the circumstances of his containment and laid out his views on how the National Movement can reclaim power, emphasizing the success of the police reforms which are being emulated now in Ukraine, where party leader Mikheil Saakashvili and other UNM tops are involved in the reforms.

The former strongman who once ordered his men to to hunt down and kill two military officers after a mutiny at an army base, promised to give amnesty to lower level members of the current government who have been involved in the legal proceedings against him and other Saakashvili era officials. But when it comes to higher level officials, he vowed to dedicate the rest of his life to get back at them.

Merabishvili was in charge of the police and intelligence services during a period of Georgia’s history which was by some called ‘neo-Bolshevik’, when dissent was not tolerated and the TV news were controlled by the government which used it to brainwash the populace. Those lucky enough to have a job were terrified of being caught criticizing the UNM, of which Merabishvili is still party secretary, which had its spies around in the workplaces.

The longer he and other ‘political prisoners’ remain in prison, the more damage is done to the image of our country, Merabishvili wrote as he celebrated his victory at the Strasbourg human rights court.

“This success gives me a chance to boldly continue my struggle and work for the benefit of our country.”