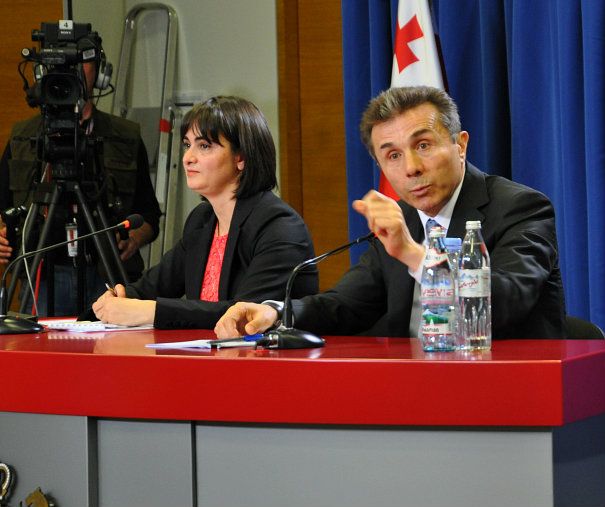 TBILISI, DFWatch–Prime Minister Bidzina Ivanishvili says journalists and employees of TV9 made a mistake when they closed down the channel immediately after his statement.

“Journalists didn’t come to TV9 from BBC and CNN. Many of them weren’t professionals; [they] were unemployed. They learnt much here with us and had a salary,” he said on Thursday.

The PM and his family recently announced the decision to close the channel if they aren’t able to find a new owner before September 1, because it was uncomfortable for him and his family having the TV channel affiliated with them.

On Thursday, he said that they have discussed many ‘serious proposals’, but the staff of the channel acted badly when they immediately closed TV9 down.

“They also were aware that there are many clients and those wanting to buy the channel,” he said, adding that he has met with every potential clients. “I explained to Mrs Luba [director of TV9] that it would have been late to close the channel later than now. Imagine if I closed the channel immediately after the election, what would have followed. I think I’ve made the right decision.”

Ivanishvili said he has spent USD 10 million on journalists these ten months, and that believes that in the period until September 1 it was realistic to find a real client. Therefore, it was unreasonable to close the channel earlier.

Ivanishvili also said that keeping the channel would cost about one million USD a month, but that he continued to support it in order to ‘not to affect the journalists’.

Later the same day, journalists working for TV9 issued a statement saying that they all understand the PM’s and his family’s decision about closing the channel.

“TV9 was a choice for each of us, and we all well recognize what it means to work in a private media outlet,” they wrote. This was a response to President Mikheil Saakashvili’s remark that the employees of the channel and the channel itself have been used for election purposes.

“Bidzina Ivanishivli’s statement was unexpected for us. We think the Prime Minister didn’t have real information about the channel’s ratings and the attitudes of its employees,” the statement reads.

Later Luba Eliashvili, General Director of TV9, told Interpressnews that it was her personal decision to close the channel after the last news program at 21:00, because it was ‘no longer possible to work after latest events and decision’.

She said she doesn’t agree with the PM that there were non-professionals on the channel, but said ‘they were decent and very professional.’