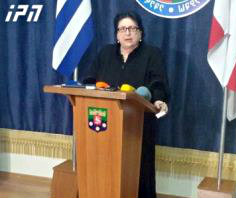 TBILISI, DFWatch–The Georgian Dream coalition has lost its majority of seats in the regional assembly in Adjara after one deputy broke ranks last week.

Medea Vasadze explained in a statement that her decision was the result of two years and four months of analysis.

Her main reason for leaving was that Georgian Dream’s city and regional structures have become ‘dysfunctional’, she said.

Vasadze claimed that the coalition is prioritizing the executive government among the branches of governments and attempts to violate constitutional bases for the balance of power.

Furthermore, she claimed that the governing coalition is attacking the principle of rule of law, a has a ‘propaganda-like’ staff policy, and has caused a drop in the number of construction projects in Adjara.

Vasadze, who is also head of the human rights commission in the Adjara assembly, said she is not resigning from this post, as she believes it is a position which should be held by a member of the opposition.

There are 21 members of the regional council. 8 are from the National Movement, two from the Free Democrats, Georgian Dream has 10 and then there is Medea Vasadze. A simple majority of 11 is required to make decisions.