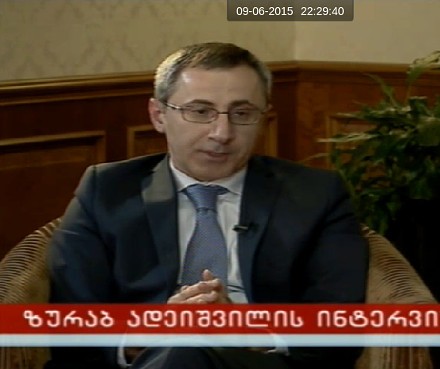 TBILISI, DFWatch–One of the most influential members of government during Mikheil Saakashvili’s presidency, Zurab Adeishvili, has finally given an interview.

Adeishvili, who was sometimes called a ‘grey cardinal’, told Saakashvili-friendly Rustavi 2 about his own and the National Movement government’s mistakes and achievements, and the party’s plans for the future.

The interview was conducted by journalist Giorgi Gabunia in what looked like a hotel lobby and appeared in the slot of his late night political talk show Archevani (‘Choice’). Since the ex-justice minister is currently working as an adviser for the Ukrainian government, viewers will have assumed that the interview took place somewhere in that country, but this was not explained.

Adeishvili was in government since the Rose Revolution in 2003, most of the time as justice minister, and oversaw a number of reforms. He is seen as having projected government influence over the Prosecutor General’s Office and the courts.

After the change of government following the parliamentary election in October, 2012, he left the country. The new government pressed criminal charges against him and Interpol declared him wanted for about a year, but recently removed him from its ‘red alert’ list.

In his interview, Adeishvili called the legal proceedings against him and the search via Interpol ‘politically motivated actions’, and said no government should act like this.

Adeishvili said the prison system was a mistake by the National Movement government, referring to torture and abuse videos released in the media shortly before the parliamentary election. The videos showed prisoners being physically, sexually and psychologically abused. The footage caused an outrage in Georgia, with over a hundred thousand demonstrating, and the wave of emotion influenced the election results. One of the charges against Adeishvili is related to this case. He said the videos made it obvious that the system had serious problems.

“It was really bad leaving such a thing unpunished. Such cases are part of any closed system, but the main mistake was that we couldn’t create effective mechanisms. This is why such a systemic problem appeared,” he said.

He also addressed two high profile murders that are still surrounded by questions: the murder of Sandro Girgvliani and that of former Prime Minister Zurab Zhvania.

About the Girgvliani case, he said that it was one of the biggest questions raised towards the government he was part of.

“This event in itself was very grave. It was followed by grave steps, late reactions. We couldn’t manage conducting a more transparent and open investigation and accordingly, we weren’t able to reassure people that every guilty person in this case was punished. It resulted raising lots of questions among voters about our trust.”

As for Zhvania’s murder he said that new government won’t be able to ‘say new things’ about the case.

“The criminal case includes exactly what happened there,” he said.

Adeishvili believes the previous government exceeded its powers on November 7, 2007 when a peaceful anti-government rally was violently dispersed. He said illegitimate force weren’t used, but in specific cases powers were exceeded.

In the same interview he said that the previous government created a precedent when government power was transferred peacefully through an election and all the following governments have to retain this. He thinks the mistake Bidzina Ivanishvili’s government made was that they didn’t refuse to carry out political arrests, and it will be correct for the next government which in his opinion will be a UNM coalition government, to refuse to do political persecution against Georgian Dream’s top people.

Adeishvili is currently advising Ukraine’s new government about reforms. A few days ago, Ukrainian media reported that he might be appointed to a government position in Odessa, but this has not yet been officially confirmed. The interview strangely avoided this question, and Rustavi 2’s journalist, Gabunia, never brought it up.

But addressing his plans, Adeishvili did said that he plans to return to Georgia, and that he won’t get involved in politics again when he returns. He had decided to leave politics when he was in government, but he couldn’t find the right time and ‘couldn’t leave his friends.’

He said he is confident that UNM and Saakashvili will regain government power and then Ivanishvili will be opposition.

“There are people who have to permanently be in politics and there are people, like me, who change. Naturally, there has to be changes in the new political team.”

He said he is sure UNM will return to government with Mikheil Saakashvili and there might not be so many new people.

“It is necessary to bring a new type of political discussion to the country, like coalition governments and a rule of making decisions based on consensus.”

He believes it is necessary to have a politics based on parties like it is in Europe.

Adeishvili said that although he hasn’t met him, he has been informed that Ivanishvili wanted to come into government in 2004 and was attempting it since then, but his ‘rules of the game’ were not acceptable for the UNM and this resulted in Ivanishvili confronting Saakashvili’s government.

But the former justice minister said he thinks Ivanishvili final choice, to come into government through election, was ‘the right decision.’

In 2011, when Ivanishvili decided to go into politics, the government revoked his Georgian citizenship, which created problems for him to be active in politics. Adeishvili said this was a legal decision, but an incorrect one.

Furthermore, he said Georgian voters had grown up in the 2012 election and their demands have increased.

He said the National Movement made a big mistake in spending a lot of resources on reforming law enforcement bodies but little resource on reforming the courts.

“That was also a certain mistake. Our government missed that chance. Now the new government is making the same mistake,” he added.