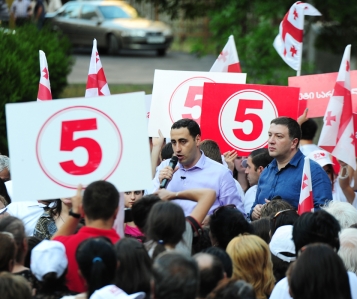 The number 5 has been the National Movement’s symbol in all recent elections. Here from a campaign rally in Tbilisi, August, 2012. (Interpressnews.)

TBILISI, DFWatch–The Central Election Commission has rejected the National Movement’s request to use the number 5 on the ballot-papers in the local elections in June.

UNM, which is running alongside the Christian Conservative Party, said in a statement May 5 that its application to use the number 5 was rejected by the CEC.

“Government and other public agencies are mobilized to restrict conditions of conducting election campaign for UNM. UNM has to face lots of barriers, like pressure on UNM candidates, their interrogations and arrests,” the UNM writes in a statement.

CEC explains that the election code requires that all parties in an election bloc participated in the previous parliamentary election, and this is the reason why UNM was not given number 5 on the ballot as they requested.

But in 2010, there were three blocs that included at least one party which had not participated in the previous parliamentary election, but they were allowed to have the ballot numbers they wanted. These blocs were Alliance for Georgia, National Council and Christian Democratic Movement.

“UNM will appeal to court and complain about this decision. We hope the government will stop its illegal activities against the UNM and the court will be able to stand the pressure and make a legal and fair decision,” UNM spokesperson David Bakradze said at a press conference on May 5.