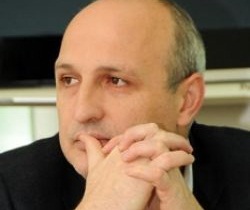 Writing on Facebook. Vano Merabishvili would be “in emergency mode” if he had still been prime minister. (Interpressnews.)

Although it is mostly the month of December which shows an alarming tendency, there is a clear trend since after October, when Bidzina Ivanishvili formed a new government following a surprise victory in the parliamentary election.

GeoStat’s report shows that in terms of export, the indicator continued a previous growth trend at 16.2 percent in October, but in November it went below zero to -2.3 percent and then saw a deep fall to -21.5 percent in December.

In terms of import there was a slight growth, 6.8 percent, in October, then it fell -4.5 percent in November and -8.6 percent in December.

The trade deficit continued to grow. In 2012, it was USD 5 465 million, which is 53 percent of the foreign trade turnover.

Used cars still held the top place on the list of Georgia’s most exported products and accounted for 24.7 percent, while ferroalloys were 11 percent of all export, followed by nitrogenous fertilizers with 5.8 percent.

12.1 percent of the import was oil and oil products; 8.5 percent was cars and 3.2 percent petroleum gases and other gaseous hydrocarbons.

Vano Merabishvili, Secretary General of the former ruling party recently said there is an alarming situation in Georgia’s foreign trade and economy in general. He said that if there had been such a situation while the National Movement was in government, the whole government apparatus would be in emergency mode.

The ex prime minister today wrote on his Facebook page that the latest trade figures from GeoStat confirm what he said.

The government should “switch to emergency mode”, he writes, and take appropriate measures to resolve the problem, to avoid a budget crisis.

The Ivanishvili government has not yet commented.