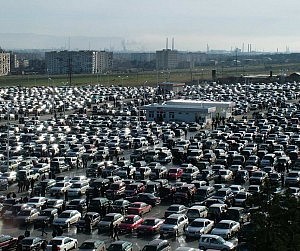 According to a new monthly report by the National Statistics Department (GeoStat), export was down 13 percent to USD 281 million, while import was one percent down to USD 1,132 million, compared to the first two months of 2015.

There was a negative trade balance of USD 852 million in January and February, which is 60 percent of the total foreign trade turnover.

Trade with former Soviet countries in the Commonwealth of the Independent States went down 18 percent to USD 353 million. Export fell 33 percent while import went down 12 percent, compared to 2015.

21 percent of the import was drugs, followed by petroleum gases and gaseous hydrocarbons group with 8 percent and oil and oil products 6 percent.

Trade turnover with Ireland was 14.8 percent of the total turnover. Turkey accounted for 14.1 percent and Russia 8.3 percent.