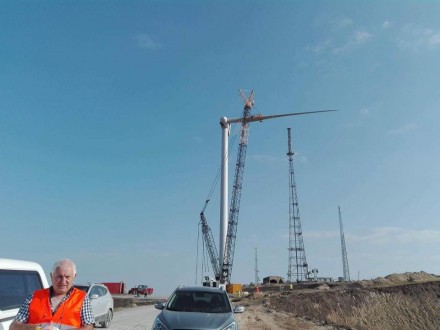 The wind power plant in Gori will be the first of its kind in Georgia.

Earlier, there have been standalone turbines with modest power output, used only for individual consumption and not connected to the power grid.

Tornike Kazarashvili, chair of the board of directors of Kartli Wind Power Station, told DFWatch that the construction of the wind farm will be finished in September and it will go into operation in December.

Kazarashvili said that the energy produced by the plant will not be for export.

Wind farm consists of six turbines, with capacity of 3.45 MW each. Thus, total capacity of the power plant is 20.7 MW.

The cost of the power facility is USD 34 million. USD 24 million of the investment comes from the European Bank for Reconstruction and Development (EBRD), the rest from Georgian Energy Development Fund and Georgian Oil and Gas Corporation; the two co-owners in KWPS.