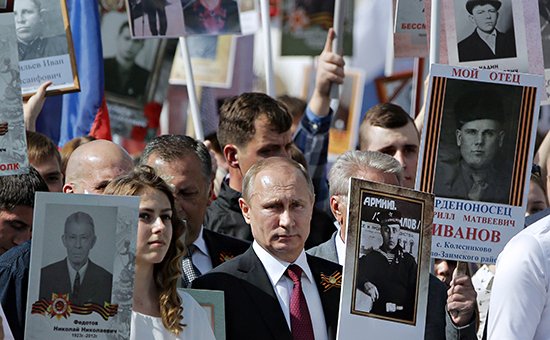 TBILISI, DFWatch–Georgia’s counter-intelligence service SUS on Tuesday warned the organizers of a May 9 rally to commemorate Soviet victory in World War 2 that they may not use Communist symbols.

Such symbols are prohibited by a law Georgia introduced eight years ago called the Freedom Charter.

But the organizers of the rally “Immortal Regiment” still plan to use pictures of Josef Stalin to at the event, despite receiving a written warning from the State Security Service (abbreviated SUS in Georgian).

Gulbaat Rtskhiladze, one of the organizers, responded to the letter in an update on his Facebook page.

“Let me decide myself what symbols to use, especially since I already announced that our movement, The Immortal Regiment of Georgia, will come out at the demonstration with portraits of our glorious ancestors who fought against Fascism, flowers and other festive attributes permitted by law, among which symbolically, in deference to history, there will be one photograph depicting the Supreme Commander of the Soviet Union, who put an end to World War II. Let your subordinates not try to provoke me with additional letters and warnings, but rather warn the terrorist media [Rustavi 2],” Rtskhiladze wrote on Facebook.

Immortal Regiment of Georgia plans to hold demonstrations on May 9 in Tbilisi, Batumi, Ninotsminda, Akhalkalaki and Gori. The Regiment holds its first large march in Tbilisi.

The Freedom Charter, adopted by the Parliament of Georgia in 2011, prohibits the use of communist and fascist symbols in public places. However, the relevant paragraphs are not clearly formulated and thus allow for wide interpretation.

The Immortal Regiment movement, sponsored by the Russian state and personally by President Vladimir Putin, is nominally dedicated to the memory of those killed and fighting in WW2, although many believe that this is actually a Kremlin propaganda campaign. The movement covers more than 80 countries, and, mainly gathers activists from pro-Russian groups or Communist parties.