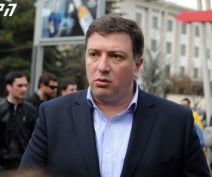 TBILISI, DFWatch–Georgia’s Constitutional Court Wednesday evening announced a ruling that the detention of former Tbilisi mayor Gigi Ugulava is unconstitutional. He is awaiting trial for numerous charges including corruption.

The ruling sets aside a provision in the Criminal Procedure Code which was in violation of the Constitution, which means that Ugulava’s prolonged pre-trial detention beyond the maximum nine months is not lawful.

Ugulava, who has been in jail since July, 2014, passed the nine months maximum last February, but a court prolonged his detention as prosecutors brought other charges – according to Ugulava’s supporters only to justify keeping him behind bars.

His lawyers now argue that he must be set free, but several officials have made statements arguing for the former mayor’s continued incarceration.

Prison Minister Kakha Kakhishvili said on Thursday that the Constitutional Court’s ruling concerns legislation, but not the legality of a particular person’s detention.

“Of course it would have been much easier if we held a court ruling where it was written in black and white that a particular person is an illegal prisoner,” he said, adding that in that case, the person would have been released. However, the Constitutional Court doesn’t consider a particular person’s case, but only the compatibility of certain regulations with the Constitution.

Kakhishvili said what should be done now is to study the ruling, determine which regulations are described in it and then order heads of prison facilities to start study cases of prisoners whose cases may be relevant to the ruling.

Later, the Prison Ministry issued a statement saying that its judiciary department has studied the Constitutional Court’s ruling and defined that according to the Imprisonment Code’s sixth passage, a penitentiary facility is the executive body of imprisonment and deprivation of freedom and any accused person is in the facility as ruled by the court until the determined term of imprisonment is over.

It specifies that the penitentiary system is only entitled to release a person after a common court has changed or abolished the decision to detain him or her.

Eka Beselia, who chairs the human rights committee in parliament, repeated the same in a post on her Facebook page. She wrote that in order for a person to leave a detention facility, it is necessary to have a decision in a common court.

She wrote that the Constitutional Court’s ruling must be followed by a specific decision by a common court about a particular person’s release.

As Ugulava’s lawyers called for his release, supporters yesterday night waited outside the prison where he is kept.

Meanwhile, a final hearing will be held today at Tbilisi City Court about one of the criminal cases against Ugulava, where also some of his supporters had gathered. Some suspect that officials pressed for postponing the release of Ugulava for a day because after this hearing, he may be sentenced to jail. The case concerns Rike Park. Besides Ugulava, also former Defense Minister Davit Kezerashvili is charged in this case.

Earlier, a crowd of protesters gathered outside the home of the head of the Constitutional Court, Giorgi Papuashvili, throwing eggs and tomatoes. One of the protesters, Merab Ghoghoberidze, was detained for petty hooliganism.

Georgia’s Constitutional Court did not satisfy the other part of the lawsuit brought by Ugulava’s lawyers, which says that the danger of the ex-mayor committing new crimes should not be grounds for using detention.