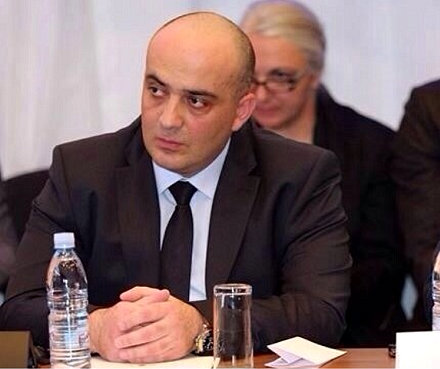 It has not been officially confirmed, but unofficially known that Partskhaladze will leave his job as chairman of the Investigation Service at the Finance Ministry and be appointed as new chief prosecutor.

Interior Minister Irakli Gharibashvili said Partskhaladze will be a ‘good and effective’ chief prosecutor. He told journalists that he will have an effective team of young and experienced prosecutors.

The Investigative Service at the Finance Ministry issued a short statement confirming that Partskhaladze has been appointed as Chief Prosecutor, and his appointment will be presented after the inauguration of the new president.

Kbilashvili announced his resignation Thursday, saying he came to the post too early. He underlined that holding an official post is not of value to him.

“If the previous government didn’t lock up the doors of justice I wouldn’t even look in the direction of politics and a position,” he said. “Being on post is a privelege, and this is not of value to me.”

He said that his views and the prime minister’s views were not compatible during the transformation of the Prosecutor’s Office.

“The PM, just like me, thinks that we must create a European prosecutor’s office in Georgia, but I support more rapid actions. Time will show if I was mistaken,” he continued.

Kbilashivli said prosecutor’s office is part of executive government and chief prosecutor must follow policy defined by the PM.

“That’s why after long discussion with Bidzina Ivanishivli we decided that I will leave post with Prime Minister as his ally and associate and continue work in civil sector.”

He said it is always hard to assure Ivanishvili about something and every time, the PM told him that it is too early for him to leave the post, but he said he came to the post too early.

Kbilashvili said he and future Prime Minister Irakli Gharibashvili have different views on the reforms and priorities in the law enforcement sphere, but there is not any disagreement between them, he added.

“We had to work together for one year. We had respectful and collegial relation and have spent many days and nights fighting crime,” he said, as he wished Gharibashvili good luck.

“I think the PM’s decision to leave his post is the best,” he said. “Ivanishvili leaving the post will be an example for his team members to acknowledge that their being in government is temporary and they shouldn’t get separated from society.”

Kbilashvili said he will remain on his post until the inauguration on November 17.

“Then the law will also change and the PM will have the right to appoint a new chief prosecutor himself.”

Interior Minister Irakli Gharibashvili said on Friday that he didn’t have any disagreement with Kbilashvili and they had ‘collegial relations.’