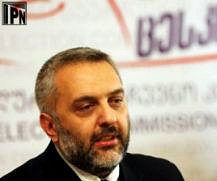 Kharatishvili’s reason for leaving is not known. He has published a statement saying that he is leaving, but will not comment on his decision until August 15, as he is on vacation, CEC explained.

In order to elect a new CEC head, the president must present candidates to the opposition wing of the CEC. A new head will be elected for a five year term.

According to the rules, the president must select three candidates after consulations with local non-commercial legal persons and candidates must be a person older than 25, be non-partisan, have higher education, know the state language, have at least three years of work experience, and a certificate as an election administration employee.

The ballot to elect a CEC head is secret and a candidate must receive at least four votes to be selected.

Eka Azarashvili, spokesperson for CEC, said at a briefing on Monday that Kharatishvili’s application to resign has been sent to parliament. She said parliament must confirm his application within 15 days, otherwise the application will come into force automatically. When it is in force, the president will have to select candidates within the following 15 days.