Georgia’s by-election last October to be investigated for fraud

Georgia’s by-election last October to be investigated for fraud 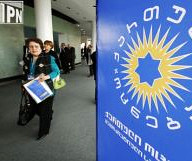 TBILISI, DFWatch–The Prosecutor General’s Office in Georgia has launched an investigation two weeks after allegations were put forth by a member of parliament about election fraud in last year’s by-election in Sagarejo in eastern Georgia.

Gogi Topadze, leader of the Industrialists Party, which is a member of the Georgian Dream coalition, claimed that the Defense Minister Tina Khidasheli fabricated the results of the by-election.

Eka Gigauri, Executive Director of Transparency International Georgia, asked the Prosecutor General’s Office to launch a probe into the case.

“This person is speaking about a crime and this is not an ordinary person. Gogi Topadze is an MP and head of a faction and he speaks of a particular crime,” Gigauri said, adding that it is important that a competent body studies the case and informs people about whether a crime was committed or if it is a case of defamation.

A day later, the Prosecutor General’s Office launched an investigation under article 332 of the Criminal Code about abuse of power.

Defense Minister Khidasheli called the process ‘a campaign against the government’s pro-western policy.’ She called on the Prosecutor General’s Office to speed up the investigation and not leave any question unanswered.

February 11, Topadze said that Khidasheli violated the law in the by-election in Sagarejo in October last year. He said she used the ministry’s resources and that it has to be investigated.

The by-election was held in Sagarejo on October 31, 2015, in order to fill the seat of Mrs Khidasheli who had been appointed defense minister. THe GD coalition’s candidate Tamar Khidasheli won the election. Her competitor was the leader of the Alliance of Patriots, Irma Inashvili.

Davit Berdzenishvili, head of the faction of the Republicans, blamed Topadze of a deliberate attack against the country’s pro-western foreign policy course and said that Topadze is the most conspicuous representative of the pro-Russian forces in parliament who launched a campaign against the defense minister, one of the most active pro-western ministers. He said that Topadze’s actions are harming the coalition. He recalled earlier statements by Topadze that NATO is an aggressive bloc and Georgia has to be neutral. He also said that a portrait of Joseph Stalin should be hanging in every public office.