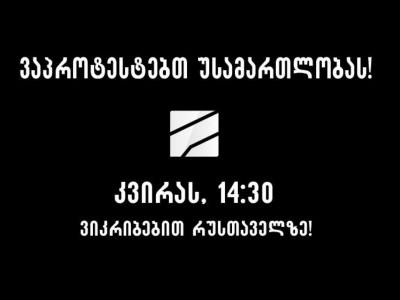 A banner posted on Rustavi 2.

TBILISI, DFWatch–The biggest opposition TV station in the former Soviet republic of Georgia has voluntarily suspended its broadcast for two days to protest what it claims is an attempt by the government to silence it.

“It was not an easy decision[…] but today we are left with no other choice,” Rustavi 2’s deputy director and news anchor Zaal Udumashvili said on Friday, seconds before the channel stopped broadcasting.

The frequency used by Rustavi 2 currently shows a black banner with the text ’protest the injustice!’ and below, the place and time of a rally planned against a  Supreme Court ruling which the Rustavi 2 management expects will strip the channel of its editorial independence.

Activists for ex-President Saakashvili’s UNM party are backing up Rustavi 2 director Nika Gvaramia and his associates in their struggle to retain control, as they show support for a TV company which always gave the party a favorable treatment, in government and now in opposition.

Tbilisi City Court ruled against the company in a private lawsuit in 2016, and the decision was upheld by the Appeals Court. If Rustavi 2 loses in the Supreme Court, it means that Kibar Khalvashi, a former owner, will take over the channel. Rustavi 2 and its supporters believe Khalvashi is being backed by the government, with an aim to silence the most popular opposition TV channel in the country.

Well-known TV journalists handed out flyers in Tbilisi on Saturday asking people to show solidarity and come to a rally planned for Sunday on Rustaveli Avenue.

While Rustavi 2 is backed up by UNM, the former ruling party which it is regarded as supportive of, also several other political parties have voiced their solidarity with Rustavi 2, along with many NGOs, journalists and popular people.

Rustavi 2 will resume broadcasting by the start of the rally on Sunday afternoon.