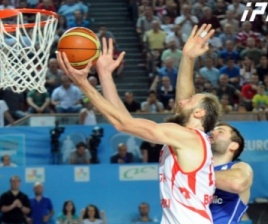 TBILISI, DFWatch–Georgia’s national basketball team won 79-59 against Hungary on Sunday, in a qualification match for the 2015 FIBA EuroBasket.

The Georgian team was only losing for one quarter of Sunday’s match. Tornike Shengelia played best among the teammates and contributed 26 scores, but he had to leave due to trauma. Zaza Pachulia, who also plays for Milwaukee Bucks in the NBA, added 17 points; Duda Sanikidze 12 points, and Viktor Sanikidze 11 points.

August 13, Hungary won against Georgia in Kecskemét. Sunday’s match was played in Tbilisi.

With three victories and two losses, Georgia is in second place in group E. Czech Republic is leading the group, while Hungary is in third place, and Portugal is last.