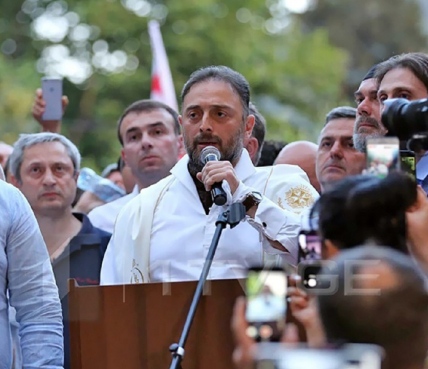 Levan Vasadze at an anti-LGBT rally in Vere Garden in Tbilisi on June 16. (Facebook.)

TBILISI, DFWatch–The conservative Georgian businessman Levan Vasadze has demanded that the government impose the strictest possible control over the media, and even jail some journalists, otherwise “nothing will save this country”.

“I address Bidzina Ivanishvili and our government to set up a regulator that will  punish media outlets and individual journalists for libel and defamation, including for insulting religious and traditional feelings,” Vasadze said in his regular video blog.

“Impose the strictest control on the media that is inhabited by shameless and indecisive people. Otherwise nothing will save this country,” he said.

Vasadze thinks this is not a hard task as it is sufficient to “strip license, slap a fine, and if needed jail one, two or three [journalists]”, to fix the country’s problems.

Vasadze gained notoriety when he repeatedly assaulted the LGBT community and prior to the scheduled Tbilisi Pride event in June threatened to unleash vigilante patrols on the streets of Tbilisi to prevent the march.