Georgians want to be member of EU, not move there

Georgians want to be member of EU, not move there 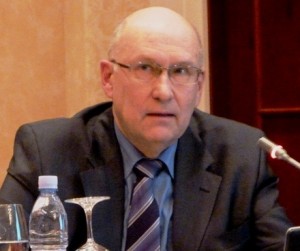 Compared to 2009, a slightly larger majority think Georgia will become a member of the European Union within ten years.

A third think this will happen within the next five years, while one in ten think Georgia is already member.

66% of those interviewed think that NATO is the most important organization for Georgia, followed by the EU and the World Bank. However, the largest group (41%) thinks EU membership is more important for Georgia than to join NATO.

88% of respondents in the survey ‘Knowledge and Attitudes toward the European Union in Georgia’ think Georgia should become EU member.

The Eurasian Partnership Foundation, which carried out the survey, interprets the results as a sign that closer integration with the EU is not just a project by Georgia’s political elite, but something ordinary people also support. ‘Georgian citizens are profoundly Europhilic,’ the report’s authors write.

The main barriers to Georgia becoming EU member are unresolved conflicts, political instability, Russia and democracy, as respondents see it. The main issues they view Georgia as facing today are employment, territorial integrity and poverty.

The largest group of those questioned (42%) thinks there is democracy in Georgia, but there is still room for improvement. 32% thinks that there is no democracy yet, but is developing in that direction.

The researchers had read people a famous quote by the former prime minister Zurab Zhvania, who died in 2005, and asked them what they thought of it: “I am Georgian, and therefore I am European”. 59% of those questioned agrees with him.

When it comes to membership, the result is clear. “If there were a referendum on joining the EU tomorrow, four out of five Georgians would vote yes,” the report says.

“Georgia’s membership perspective approximation is on the agenda and we are on the right track, but if we speak toward membership, let’s be realistic, I am afraid that now there is little room for interest in this region, it’s fair to say that Georgian membership is not on the agenda today,” Hennig said Monday as the report was presented at Tbilisi Marriott Hotel.

Kakha Gogolashvili, the director of the Center for EU Studies at the Georgian Foundation for Strategic and International Studies (GFSIS) agrees with Hennig, saying that Georgia’s EU integration in the next five years is unrealistic.

“Maybe on emotional grounds optimism prevails, and it is not sensible that five years for Georgia’s EU integration is unreal time.”

Ortwin Hennig makes note of the fact that Georgians want to see ties not only with the EU, NATO and America, but also with Ukraine, Russia, Turkey and Azerbaijan, according to the survey.

When it comes to EU perception, the ambassador says that there is a difference between the people’s point of view and the officials.

“The impression that I get from my official partners that I talk to in this country [is that] they seem to prefer NATO as a first security priority. Many ordinary Georgian citizens probably understood quite well that EU offers what I like to call soft power,” he says, adding that the Georgian population perception towards Europe offers some sort of not hard military security, but a soft form of security.

Oliver Reisner, project manager at the EU delegation to Georgia, today expressed a critical attitude towards the report’s results. The survey was conducted in July, 2011, a little bit earlier before the appearance of Georgian billionaire Bidzina Ivanishvili in politics. After the businessman decided to go into politics he and people around him have faced a number of problems because of actions by the government. There has also been a lively discussion in society.

Reisner says that if the research had been conducted after October 2011, it might have shown a different picture.

“Life has become more active since then,” he says.

Another apparent problem in this regard is that people in Georgia are poorly informed about what the EU really is, and what activities it is involved in here.

During a discussion afterwards, several reasons were named to this: that the media is not covering such issues very often, that the government is just speaking of EU integration but does not really explain what it means and what the EU’s policy is towards the country.

“One of the qualified sources for media and the rest of the population should be the non-governmental sector. The more NGOs work in different specific directions, the better situation we will get,” Keti Tsikhelashvili, the director of the Liberal Academy of Tbilisi says.

The State Minister Adviser Tamar Beruchasvili remarked during the discussions that unfortunately there are no EU centers in Georgia.

“This is a traditional practice of the EU in partner countries. Especially, in countries which have declared their European aspirations. For example, there are eight such centers in Ukraine, while in Georgia there is only one,”she says, adding that there is a serious effort from the government, which holds dialogues with civil society groups to increase public awareness.

Kakha Gogolashvili remarks that it’s important for the government to work on the European communication strategy:

“We see that the government is more active towards NATO, but I don’t diminish its importance. It is necessary to prepare a strategy of communication towards EU which will be understandable for society.”

On these grounds the guests concluded that the public perception towards EU integration is still positive and even surprising.

The survey was carried out by Caucasus Research Resource Centers, a program of Eurasia Partnership Foundation. 1818 persons were interviewed in July 2011. The margin of error is 4%.