Georgians less satisfied with their government

Georgians less satisfied with their government 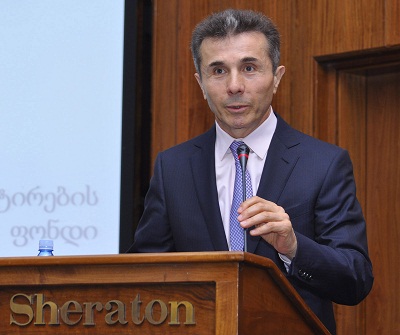 Does ex-Prime Minister Bidzina Ivanishvili pull the strings in government after he left office, is one the issues people were asked about in NDI’s poll. (Interpressnews.)

TBILISI, DFWatch–36 percent of Georgians think the country is definitely or mainly going in the right direction. This is significantly lower than in November 2013, when 53 percent were of the same opinion.

This is one of the results presented Monday in the latest survey of public attitudes by the National Democratic Institute (NDI), 38 percent think Georgia is not changing at all, while 19 percent think their country is mainly or definitely going in the wrong direction.

The majority of those questioned think that the most important areas to reforms in Georgia now are healthcare, agriculture and education. The most important national issues are jobs, territorial integrity and poverty, as respondents see it.

67 percent of the questioned say they consider themselves unemployed; 33 percent say they are employed.

About a month ago, former Prime Minister Bidzina Ivanishvili, who created the Georgian Dream coalition, criticized President Giorgi Margvelashvili, who he picked as candidate for president. Ivanishvili said that after the election, the president showed completely different features and that he is ‘dissatisfied’ with Margvelashvili.

35 percent of the questioned, who were aware about this criticism agree with it, 40 percent don’t agree, while 25 percent don’t know or didn’t answer.

45 percent are aware of the ‘This Affects You Too’ campaign which was launched by influential non-governmental organizations with the aim to change legislation in order to prohibit illegal surveillance by law enforcement agencies. 62 percent agree with the campaign, 10 percent don’t agree, and the rest don’t know.

62 percent agree or very strongly agree that former Prime Minister Ivanishvili continues being a decision-maker in the actions of the government. 18 percent think he is not a decision maker. 2 percent don’t agree with any of these views, while the rest say they don’t know. 41 percent approve of the idea that Ivanishvili continues being a decision-maker, 29 percent don’t approve. The rest don’t know.