Georgians disappointed with the govt, but don’t trust the opposition

Georgians disappointed with the govt, but don’t trust the opposition 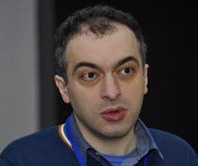 If the government can’t acknowledge that their popularity is dropping then we are dealing with an even worse situation, says Tornike Sharashenidze, Professor at GIPA. (Interpressnews.)

TBILISI, DFWatch–Georgians are disappointed with the government, lack confidence in the opposition and are worried about the situation in the country – these are the main findings of a recent poll published by the National Democratic Institute (NDI).

Judging by the results, the mood among Georgians now seems to be of an economic situation that is getting worse day by day. One of the issues that especially worry people is a more than 30 percent devaluation of the national currency, along with unfulfilled election promises.

But the government rejects the notion that there are problems, just saying they do not believe the results of the poll.

According to the political part of the poll, which was published on Wednesday, Finance Minister Nodar Khaduri is the least successful minister. Only 6 percent of people think he is performing well.

The most popular member of the government is Health Minister Davit Sergeenko.

Another notable result is that 52 percent of those questioned don’t like how the parliament is performing. It is almost on the bottom of list with only 10 percent approval.

Compared to previous polls, the prime minister’s rating dropped by 14 points. Now only 40 percent say they like him, down from 54 percent last time.

As usual, Patriarch Ilia II has the highest rate of approval with 87 percent. The second person on the list is President Giorgi Margvelashvili with 52 percent.

Former Defense Minister Irakli Alasania is next with 51 percent. His Free Democrats left the governing coalition in November and became an opposition party.

26 percent say they like Nino Burjanadze, leader of the Democratic Movement. She also scores high on the percentage who dislike her, and is by many labeled ‘pro-Russian’.

Looking at the party ratings, the alternative that scores highest is those who don’t who they would vote for if there were a parliamentary election tomorrow – 27 percent.

The next most popular choice is the ruling Georgian Dream coalition with 24 percent, and next the National Movement with 16 percent.

44 percent would not participate in the election at all. The majority of the interviewees say none of the parties are closer to their views.

The results presented by NDI are quite close to what a poll conducted by the International Republican Institute (IRI) showed in the end of March, but rating of the ruling coalition was higher then, 36 percent, while 14 percent supported the National Movement.

The government’s opponents and political and economic analysts agree that the poll clearly indicates that the government has lost trust, which is ‘quite adequate to the current situation.’

“The popularity of Georgian Dream is dropping and if the government cannot acknowledge this then we are dealing with an even worse situation,” Tornike Sharashenidze, Professor of Political Science at Georgian Institute of Public Affairs (GIPA), told DF Watch.

Sharashenidze thinks the high number of people who answer ‘don’t know’ – 45 percent – is a category of people who most likely were supporters of Georgian Dream, but are disappointed.

“In this situation, the rating of Georgian Dream will probably continue to fall. Right now, the popularity of the other parties won’t increase, including the National Movement, but if some kind of scandal takes place, like the so-called broomstick scandal [prison torture videos published in September 2012, ed.], it may radically change the situation and those who are uncertain now may join the opposition. Time will show which opposition,” Sharashenidze explains.

In this situation, he thinks, the government should not deny the results of the NDI poll but take it as hint.

But government members say they do not trust such polls.

NDI conducted the poll between March 27 and April 19, interviewing 3,360 people in Georgia. It was financed by Swedish International Development Cooperation Agency and carried out by CRRC.