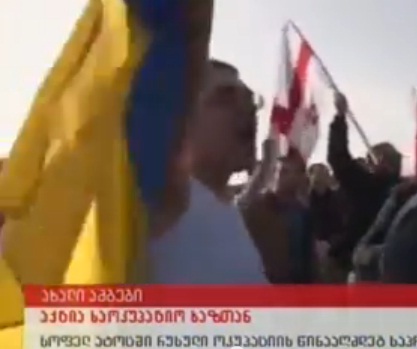 The demonstration was held in the village Atotsi, near the town Kareli.

The rally was organized via Facebook by individuals joined by students, singers, writers, ordinary people in order to expressed their protest against what is widely consided an occupation by Russia. httpv://youtu.be/qbJBrEuaWA8

“Our adequate reaction to every step by the occupant today will simplify the way which the Georgian population must go through sooner or later,” organizers say.

Demonstrators carried Ukrainian flags, connecting their own situation with the current standoff between Russia an interim government in Ukraine.

An attempt was made to go closer to the barbed wire, but Georgian law enforcers didn’t allow them nearer for safety reasons.

South Ossetia media observed the rally from the other side of the fence.

Demonstrators also performed the Georgian anthem in the village.