Georgian wine to Russia in months

Georgian wine to Russia in months 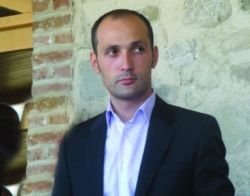 Levan Davitashvili, head of the National Wine Agency, believes Georgian wine might be back on Russian dinner tables by the end of spring. (Interpressnews.)

TBILISI, DFWatch — Georgian wine might get back on the Russian market by the end of spring and it will cost about USD 10, which is higher than the average wine price in Russia.

A delegation from Georgian business and government is in Moscow to negotiate about a return to that market. The group of seven met with Gennady Onishchenko, head of the Russian consumer protection bureau, and Monday presented Georgian products and the details of how the quality control works.

Gennady Onishchenko said it is quite realistic that Georgian wine might get on the market by spring.

Onishchenko noted that about 60 Georgian companies have indicated interest in selling their wine and mineral water to Russian consumers.

The seven person delegation left on Sunday. Apart from Davitashvili, two are from the National Food Service, two from the wine association and one from a fruits and vegetables export company.

In 2006, Russia closed its market for Georgian and Moldovan wine. The reported reason was that the consumer protection agency CPS (Rospotrebnadzor) had determined that Georgian wine did not live up to health safety standards. Georgia currently exports wine to about 50 countries.

Before the 2006 embargo came into force, about 75 percent of Georgia’s wine export went to Russia. According to official statistics, Georgia exported wine in the amount of USD 80 million in 2005, while in 2007 it fell to USD 29 million (2.4 percent of all the export).

But the wine export has increased significantly over the years, and in 2010 amounted to USD 54 million (2.5 percent of all export), according to the Georgian Statistics Department. The top importer country of Georgian wine is Ukraine, which imports wine worth USD 22.5 million per year.