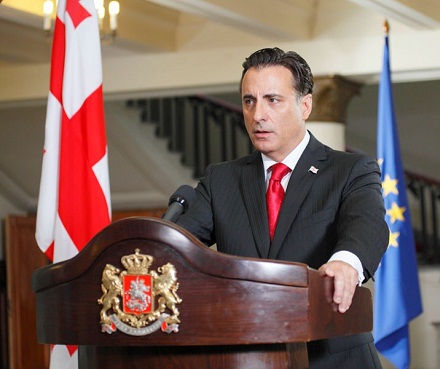 Andy Garcia in the role as Georgian president Mikheil Saakashvili in the Hollywood film Five Days of War.

TBILISI, DFWatch – A movie about the Russo-Georgian war in 2008 is causing controversy among film critics and on social media in Georgia.

The film “5 Days of War” premiered last summer with much fanfare. The film tells a personal story against the backdrop of the war between Georgian and Russia in August 2008.

The official budget was USD 12 million, but it only grossed about USD 300 000 after being screened in select cinemas in the USA. On the popular database International Movie Database (imdb.com), 7 000 users rate it at 5.6 points out of 10. On another popular review site, Rotten Tomatoes, it received only 4.4 points out of 10 in 33 reviews.

The film premiered in Tbilisi with the presence of several of the stars. The Georgian government in addition had invited Hollywood actress Sharon Stone to the premiere in the small Rustaveli cinema in the center of Tbilisi, which took place just a few days after the cinema building had been the scene of violent clashes between protesters and police.

The movie was co-produced by Koba Nakopia, member of parliament for the ruling National Movement party, and Papuna Davitaia, State Minister for Diaspora Issues.

President Saakashvili claimed that the film was financed by his government. However, according to local media, the film was almost enrirely financed by its co-producer, MP Koba Nakopia, who paid an additional 20 000 lari to sit next to Sharon Stone at the premiere. In his speech, President Saakashvili said Koba Nakopia was ‘the main figure’ in making the film, as he had ‘a huge heart and love towards his people.’

Maestro, an independent Tv channel, made an investigative report about Koba Nakopia. The report is dedicated to find out more about his property, which is tied to Russian business and the businessman Sergey Generalov.

Looking for sources for how Nakopia could finance the movie and whether it was Russian money, journalists scrutinized the ownership of the Georgian gold mining business. They found that 100 percent owners of Georgian gold are Koba Nakopia, Sergey Generalov and Saakashvili’s uncle Temur Alasania.

“This fact raises suspicion that Five Days of War was financed with Russian money. However, Nakopia says he borrowed about USD 20 million from the bank to finance the shooting of the film.”

The film’s premiere in Tbilisi was also financed by Nakopia.

It was an attempt to promote the movie in some other places of the world. In the USA it was a near flop. Gogi Gvakharia, one of Georgia’s most well-known film critics, reported that the movie was presented to film distributors at the Cannes festival.

Gvakharia says the company and studios rented locales in order to show their product during the festival.

“I suspect this way was rented the hall at one of hotels called Grey. In a small hall, which could house about 100-150 people, this film was shown.”

Among viewers were foreigners and Georgians; as well as producers, and the hall was completely packed.

The film’s plot revolves around an American journalist and his cameraman who arrive in Georgia to cover the conflict in the Tskhinvali region. They attend a wedding in one of the villages near the region, when bombing starts, and the two foreigners have to get through the war without getting killed, and bringing a local family with them.

Again to quote critic Gogi Gvakharia, he says that movie gives the impression of being a low-budget film, despite the large amount of money spent.

Gvakharia published a critical letter, which caused a furor in Georgia, and with some calling him a traitor.

He wrote that in on May 18, they showed pro-Georgian movie at the Cannes film market, ‘which is suspicious to get new friends for Georgia. No friends but the lack of talent may even get rid us people, who without hesitating supported us in “Georgian-Russian” war.” 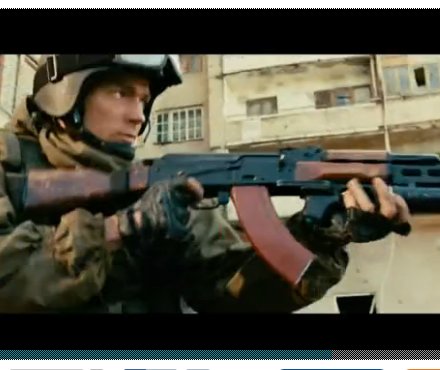 A Russian-made film which premiered in 2012, 'August Eighth', showed Georgians as the aggressors.

Later in an interview with a local website, Nakopia said that the anyone who is critical of this movie, which is the first Hollywood project in the country, is an enemy of the country,” a statement which has been subject to strong criticism.

“Who had suspicions? Misha is outstanding, Oscar to him for chewing tie outstandingly,” one of the users comment to Gvakharia’s letter.

Natia, another user from Georgia, writes that this is a the movie which should be criticized by critics.

“This movie has only one goal, and it is political, propaganda. There is no art here. They shot this film not to make us forget who our enemy is.”

But another user writes on an online forum that he is inclined to be positive to a film about his homeland and about the most difficult days for the country.

One Russian blogger wrote that this movie is ‘a correct calculation.’ It’s not a high level action movie, but a sort of movie popular among average viewers.

“Many people go to watch only to rest, to have some emotion, see effect, a bit action, etc.”

Teo Khatiashvili, who is also popular Georgian critic, is quoted in one of the blogs saying that the film turned out to be bad.

“Let’s agree on that and admit it. Maybe it answers to someone’s patriotic feelings, some are skeptical, some aren’t – it’s a subject of taste and intellect. But the duty of a critic is to be free of emotions. Patriotic and ideological evaluation was in the Soviet Union.”

“Here you will hear a great deal about the war, but learn not so very much, and all of that from the Georgian point of view.”

The majority of critics, despite being Georgian, Russian or from some other country, wrote that the movie is Georgian propaganda, a movie which covers up mistakes made by Georgia during the war.

Later, a Russian film was made called August Eight, which although written by an American scriptwriter, Michael Alan Lerner, was 80% financed and assisted by the Russian government, many reacted to the way it showed Georgians as the aggressors in the war. The movie was even denied shown in several cinemas in Azerbaijan.

One Russian movie goer wrote that he made himself familiar with Georgian, Russian and international criticism of ‘Five Days of War’ and the essence of it was that everyone has their own truth and everyone sees it in a different way.

“As a result – lots of dead and maimed of our countrymen with you.”

It turns out, he has served 15 years in the army and has seen a lot.

“There is no one’s truth Georgian or Russian, but there are survived and dead for nothing.”