Georgian voters to get political debates

Georgian voters to get political debates 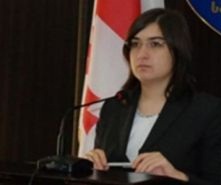 TBILISI, DFWatch – The ruling party says the current parliamentary speaker and the prime minister will represent it in election debates.

Prime Minister Vano Merabishvili is the National Movement’s candidate for prime minister in the election.

The chair of the public broadcaster announced their plans for election debates. Then Chiora Taktakishvili, spokesperson for the National Movement party, named who would participate on behalf of her party in the debates.

GPB is financed from the state and is officially obliged to hold election debates.

Gia Chanturia, head of GPB, said at a press conference Wednesday that according to law, the National Movement, Christian Democrats, Georgian Dream and Labor Party have a right to participate in the debates.

“We will send an official message to the parties today. GPB awaits confirmation or refusal until 18:00 of September 4.”

Eka Mishveladze, journalist of GPB, will host the debates. They will last from one hour and 20 minutes to one hour and 40 minutes. Each participant will have two minutes for an opening speech. Then, the anchor will ask three questions to each participant.

Gia Chanturia says that questions will be selected from surveys conducted by international organizations in Georgia, which reveals important topics for the Georgian population and also from questions sent by media representatives to the e-mail debatebi@gpb.ge.

Chanturia says the exact time of the debates has not yet been decided. Several minutes later from his statement Ruling Party responded that they are ready to participate in debates.

“We have repeatedly said that the goal of the National Movement is to win in free and fair elections. So, we challenge our opponents in election debates, which will contribute to voters making an informed choice.”

She called on other political forces to participate in the debates.

The other three political parties are ready to participate, but haven’t yet said who will represent their parties.

September 1 is the last day to present a party list, after which it will become known who will be on the top of each party list.