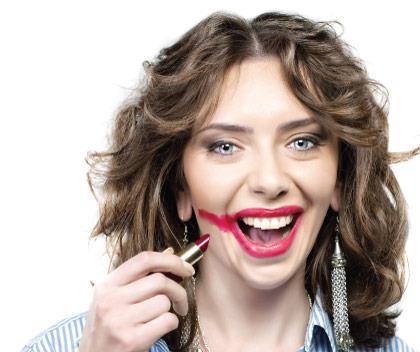 The insurance company GPI has apologized for an advertisement campaign which made fun of women's dual use of the car mirror.

TBILISI, DFWatch – In Georgia, there have been demonstrations throughout March against what is seen as violations of women’s rights.

The national TV channel Imedi started a show called ‘Women’s Logic’. The concept is that three two-member groups of men are invited to the studio. Outside, there are three two-member groups of girls sitting in comfortable armchairs. The show host asks each group of men general questions and then the men have to guess if the women would have answered this question correct or incorrect. Finally, the group which is able to guess the women’s correct or incorrect answers wins a maximum of 1 500 lari.

The questions are like: Does the Moon go around the Earth or the Earth go around the Moon? Is Brasilia the capital of Brazil or not, or how much it is the square root of 36? The girls, who are drinking champagne, usually do not know the right answer but try to guess by asking each other some questions. They are often models or designers, fashion lovers.

Since the first program was broadcast, it received sharp criticism on social networks in Georgia. Yesterday, local organizations held a rally in front of the Imedi building, including groups like Georgian Young Lawyers Association, LGBT Georgia and Transparency International.

They filed a complaint in order to close the show, claiming the program is clearly discriminatory towards women. Around 1 000 people signed an online version of the complaint.

‘Logic has no gender’ one of the main messages was saying.

“The show clearly underlines that a woman is a not a person, that she should be valued only for her appearance and good looks,” one of protesters says.

“They strengthen the stereotype that if a woman is beautiful, then she’s stupid with no brains,” Lika, another protester says.

A couple of weeks ago, there was another controversy around the PR campaign of a Georgian insurance company; GPI Holding. On March 8, the international Women’s Day, the insurance company suggested an event for women: if they would insure a car for a certain period, they would receive some gifts.


But advertisements displayed women with soiled/stained make-up: the message here is that in Georgia there is another stereotype that women cannot drive as well as men, they use car mirrors in order to check their make-up and so while they try to correct the make-up they may have accidents which results in a stained face.

An online campaign was launched on Facebook soon after the advertisements were published: ‘Calm down, I made my make-up already.’ People started taking photos with strict red make-up holding posters, which read this message.

As a result, the company released a statement apologizing for what happened; however the advertisement photos are still on their pages as main photos and covers.

In its apology, the company says that advertisement campaign is really based on the stereotype of women’s multipurpose use of car mirrors.

“This of course doesn’t mean that women are better or worse drivers. On the contrary, according to our internal statistics, women drivers have better results. They are more rarely involved in accidents and care more about their cars.”