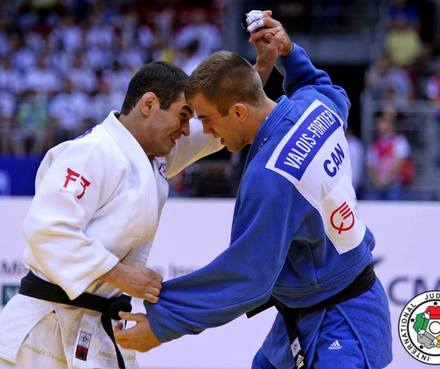 Avtandil Chrikashvili won gold in men’s half middleweight in the World Judo Championship. (Photo published by the Georgian Judo Federation.)

Chrikashvili won six fights and in the end defeated Antoine Valois-Fortier from Canada in the men’s half middleweight (81 kg).

The Georgian gold medalist also took first place in the European Judo Championship in 2013. After that, he won a gold medal in the Judo Grand Slam Paris 2014 tournament.

The Judo World Championship is held from August 25-31 in Chelyabinsk.

Georgia is in third place in the medal count with one gold and one bronze, after Japan and France.

Amiran Papinashvili won a bronze medal on Monday in the men’s 60 kg category. From before, he has a silver medal from the European Championship.