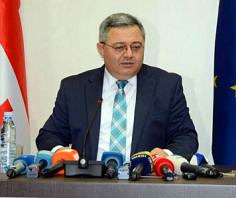 TBILISI, DFWatch–As Georgia’s speaker of parliament visits Kiev, political analysts in Tbilisi are watching for signs of how strong the bond is between the two governments.

Speaker Davit Usupashvili is accompanied by parliament members Tedo Japaridze and Tinatin Khidasheli from his own Georgian Dream coalition and MP Giorgi Vashadze from the opposition National Movement.

Their plans while in Kiev are rather uneventful: visiting the Holodomor monument, meeting officials and parliamentarians.
Usupashvili will also meet his counterpart in the Ukrainian Rada and talk about how it’s going with the implementation of the association agreements their two countries signed last year with the European Union, as well as discuss regional security, parliament’s press office announced.

But what analysts will be watching for among these niceties is indications that the ties between the two ‘color revolution’ allies from 2003 (Georgia) and 2004 (Ukraine) have weakened.

Current Georgian President Giorgi Margvelashvili, who by some is considered more western-oriented than the government, was in Kiev in February, taking part in the one year celebration of the latest Ukrainian revolution, Euromaidan. Now the focus is on the coalition members and how strongly they will show their dedication to the new Kiev government, which has employed some of their staunch political opponents.

The 2003 Rose Revolution in Georgia brought the party Vashadze represents to power, setting out a much more confrontational policy toward Russia, and fighting a brief war with the country in 2008. While the National Movement was voted out of office two and a half years ago and replaced by a coalition which mended ties with Moscow, some of its leaders found a new home in Ukraine after the revolution there in February last year and are working as advisers for the new government under President Poroshenko.

There have been some signs of discord between these veteran countries of colored revolutions. The coalition which now runs Georgia objected to the appointment of former President Saakashvili, as he is subject to an arrest warrant in his home country. Ukraine’s ambassador was summoned to the Foreign Ministry to explain, which prompted the National Movement to repeat its regular claim that the Tbilisi government is conducting a pro-Kremlin policy, noting that it has wavered about the economic sanctions against Russia.

But the government rejects this idea, pointing out that the pro-Western foreign policy course remains and assures that relations with Kiev have not worsened.

Despite reassurances, doubts remain. When one Georgian volunteer died in Ukraine’s war, the Defense Ministry in Tbilisi published a statement which called on the National Movement not to talk young Georgians into dying in another country’s war. The statement was quickly retracted, but suspicions linger that it was an expression of what some coalition members say when the media is not around.

Meanwhile, analysts are waiting to see when Prime Minister Irakli Garibashvili will go to Kiev. Two months ago, he said he was planning to do it ‘very soon.’