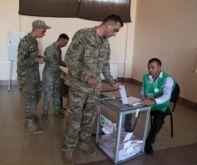 TBILISI, DFWatch–Georgian soldiers serving in the NATO-led ISAF mission have voted at two precincts in Afghanistan.

Usually, elections are held in Afghanistan a few days before Election Day, which this year is October 27 for Georgia and for all the other voting locations abroad.

50 election precincts will be opened in 36 countries.

There are now six days left until the election. 23 candidates are competing to succeed outgoing president Mikheil Saakashvili.