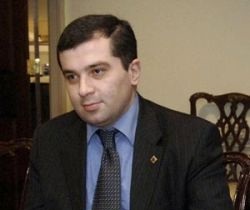 TBILISI, DFWatch–The Georgian Prosecutor’s Office wants to study the income of Davit Bakradze, former Speaker of Parliament and MP for the National Movement.

The office said in a statement on Wednesday that information reported by the media about Bakradze indicates that there may have taken place a violation of criminal law.

Wednesday, there were reports that Bakradze and his wife closed an account at the British bank HSBC containing 261, 000 pounds sterling.

Bakradze, who is currently abroad, responded that this money belongs to his father-in-law who got the money after selling an apartment on Krtsanisi Street in 2002, which then was the president’s residence. He said the father-in-law sold the house for USD 400 000 and wanted to give the money to his grandchildren when they would come of age. Bakradze has two young children.

In 2009, Bakradze’s father-in-law asked his daughter to place the money on a saving’s account in a safe bank with good long term conditions. In 2002, Bakradze was Speaker of Parliament, and he picked this bank because it was trustworthy and because it had a branch in Tbilisi and it was easy to open an account there.

In spring 2009, the opposition on Georgia launched a wave of protests – the biggest Georgia has ever seen – which which lasted several months and even interrupted the activity of the parliament. The opposition didn’t achieve its goal – that President Saakashvili should leave – through the protests, but before launching the protests people expected that the government would change and there would be disorder in the country. Bakradze says that the Swiss embassy purchased that house to use it as an office and so the payment was carried out by the embassy the income was legal.

The statement by the Prosecutor’s Office said that there is 276 849,89 pounds on this bank account and the money wasn’t indicated in Bakradze’s official property declaration, so the office plans to study the issue.

Transparency International Georgia also said there may be indications of a possible violation of law on closing of this account, as for years Bakradze never mentioned this money in his property declarations, which is a violation of law.

Meanwhile, Bakradze claims that secret communication between him and the bank was made public, which is not legal.

He said the practice of surveillance and publishing personal information is continuing with impunity in Georgia.

“The government widely uses and encourages persecution and surveillance of political opponents and a practice of publishing personal and confidential information for personal revenge,” Bakradze said.

It is still unknown how the media got the information about the bank account.