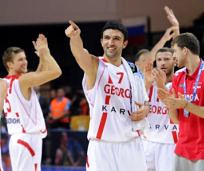 TBILISI, DFWatch–Georgia’s Sports Ministry has handed a property in Tbilisi to a Georgian who is a professional NBA player in the United States, playing for Dallas Mavericks.

Zaza Pachulia, who is also captain of Georgia’s national team, plans to establish a basketball academy in compliance with National Basketball Aassociation standards.

The space is on Tsereteli Avenue in the capital, and is handed him for a 50 year term. There are currently four playing fields at the location, as well as apartments for athletes, a training center with gym equipment and other sport items.

Prime Minister Irakli Garibashvili, Minister of Sports Tariel Khechikashvili, Zaza Pachulia and representatives of Tbilisi City Hall visited the location on Wednesday and met with members of the national basketball team to cheer them up and wish them good luck in the European championship.

The PM said during the meeting that the sports center on Tsereteli was refurbished for the European Youth Olympic Festival, which recently took place in Tbilisi.

The contract with Pachulia involves training youth with Georgian, American and Turkish coaches.