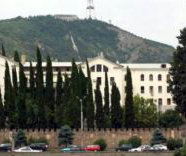 TBILISI, DFWatch–A priest awaiting trial for murder is suing Georgia at the European Court of Human Rights, claiming the country is depriving him of a fair trial.

Archpriest Giorgi Mamaladze is  accused of planning to poison a member of the Georgian patriarch’s inner circle.

The Tbilisi-based non-governmental organization Human Rights Center, which is assisting Mamaladze in the lawsuit, said on Wednesday it will file the suit this week.

Mamaladze decided to sue Georgia at the ICHR after the Prosecutor’s Office again rejected his lawyers’ appeal to exempt them from non-disclosure obligation they signed on to at an early stage of the investigation. The defense lawyers since claimed that being forced to not disclose documents has limited their competitiveness.

Mamaladze was detained at Tbilisi airport on February 10 as he was boarding a plane to Berlin sodium cyanide in his luggage. As an archpriest, he was part of the inner circle of Patriarch Ilia II, who had undergone laparoscopy on his bladder and was staying at a hospital in the German capital.

Law enforcers first tried to keep the arrest secret, but after Rustavi 2 reported on it, police had to acknowledge it and informed that the priest was under investigation for poisoning attempt.

The exact target of the alleged murder attempt has been a matter of much speculation. Officially the archpriest is charged with attempted homicide of Shorena Tetruashvili, one of the advisers to the patriarch. Although not holding any formal position within the Church hierarchy, she is believed to hold a strong sway over the archbishops and the patriarch himself.