Georgian president will not attend signing of EU treaty

Georgian president will not attend signing of EU treaty 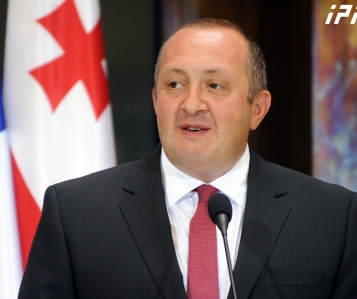 President Giorgi Margvelashvili will not be present during the signing of a treaty between Georgia and the EU in Brussels on Friday.

TBILISI, DFWatch–The Georgian president, whose authority includes signing international treaties and who delegated the right to sign the Association Agreement with EU to the prime minister, won’t be in the Georgian delegation.

Foreign Minister Maia Panjikidze said this at the last press conference before the signing of the agreement. Association Agreement will be signed on June 27 in Brussels. Prime Minister Irakli Gharibashvili will chair the Georgian delegation and will be the one to sign the treaty.

With a set of constitutional amendments which came into force after the presidential election in October 2013, the powers of the president were significantly reduced, while those of the prime minister increased. It was an initiative by ex-President Mikheil Saakashvili, at a time when many thought he was preparing to assume the post as prime minister after the end of his second presidential term. The coalition currently in government was against these amendments while in opposition, but changed nothing after coming into power.

Now, the prime minister, who has increased power, tries to deprive the rest of the functions from the president and turn them into his prerogative.

Signing the Association Agreement is a good example. The constitution reads that the president signs international treaties as the head of state, but he needs the agreement of the government about the issue, but not particularly about the signing. The PM interpreted the constitution as saying that the president needs the agreement about signing, but there are lawyers who disagree with him.

A few days before signing the agreement, it turned out that the president is not even on the list of members of the Georgian delegation. In the beginning of June, Gharibashvili said at a press conference that if Margvelashvili wants, he could be put on list, a statement he was criticized for.

The president says the important thing for him was to sign the treaty, not who does the signing.

“For me, as to an ordinary citizen, the important thing is that the agreement is signed, the rest of the details aren’t interesting,” he said in a TV interview after Maia Panjikidze’s press conference.

The president said he had decided to delegate signing powers to the prime minister out of state interests.

“All the rest are details at this stage.”