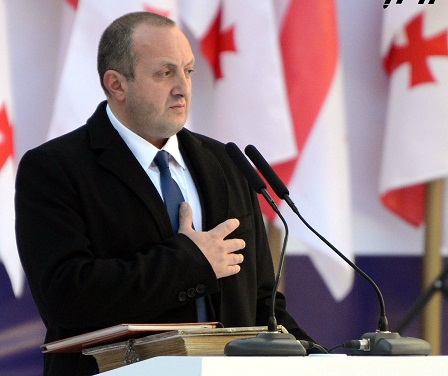 TBILISI, DFWatch–Georgian President Giorgi Margvelashvili has transferred the right to sign an Association Agreement with EU to the prime minister for him to sign.

Who will sign the AA has been a subject of debate the last few weeks.

Government officials have repeatedly said that the prime minister is the one who will sign the agreement, but according to the constitution, it is the president who signs international agreements after agreeing with the government.

This has caused concern among some people, and experts have even said that it may put the legitimacy of the AA into question.

On Tuesday, the president’s parliamentary secretary Davit Pataraia said at a briefing that according to the constitution, signing international agreements is the authority of the president, but the president gives the PM a one-time right to do it.

Pataraia said this is an agreement which has great importance for the country.

“The government decided that it intends to define the prime minister as the person who will sign it. In order to make it unquestionable that the PM has a right to sign the agreement today and in the future avoid questions about the legitimacy of the signature, the president made a decision to transfer his own authority one time to the the prime minister,” he explained.

He referred to the Georgian law on international treaties, which says the president makes decisions about signature in his decree, which requires the PM’s countersignature.

The president’s administration will send the decree to the government on Tuesday.

“We hope that the constitutional procedure between the government and the president will end in the next few days,” he said.