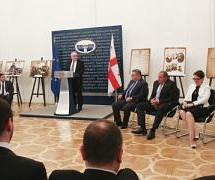 TBILISI, DFWatch–The Georgian president on Monday marked the appointment of one more ‘rebel judge’ to a top level position the country’s court system.

Merab Turava was sworn in as a new member of the Constitutional Court at a ceremony in Batumi attended by the president, speaker of parliament and new head of Supreme Court.

Parliament approved Turava on March 20 by 84 votes against one.

Both him and Nino Gvenetadze, the new head of the Supreme Court, have a background as Supreme Court judges during the first year of the Saakashvili regime, while Konstantine (Kote) Kublashivli was chief justice.

In late 2005, Kublashvili forced Gvenetadze, Turava and several other judges to leave their posts, arguing that they had committed disciplinary violations. This happened at a time when politically motivated cases were ongoing at the courts. After the Rose Revolution in 2003, the government took drastic measures in many areas of society. Gvenetadze and Turava publicly accused Kublashvili of putting pressure on judges.

Unlike most democracies, in the Georgian court system, the Supreme Court is not the highest authority. Above it stands something called the High Council of Justice, which keeps tabs on the performance of individual judges and may fire them or resassign them to a different court – typically to a remote corner of the country, as punishment.

The disciplinary panel of the High Council of Justice, which back then was mainly staffed by pro-Saakashvili representatives, considered the case of 15 judges, and Gvenetadze was among them. All these cases still remain confidential, so no details are known. Gvenetadze and several other judges protested against this decision in 2005, claiming that it was politically motivated. In the Saakashvili-friendly media, they were labelled as ‘rebel judges.’

At Monday’s ceremony, the president congratulated Turava as the new appointee for the Consitutional Court.

“I will protect the interests of every person, individual or legal person, and I will be objective, independent and unbiased while making decisions,” Turava said.