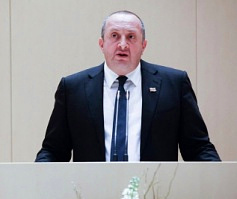 TBILISI, DFWatch–When the Georgian president held his state of the nation speech in parliament on Tuesday, the government and the prime minister were absent – again.

This is the second time the government has snubbed President Giorgi Margvelashvili. The same thing happened last year, during his first annual speech to parliament, which came at the peak of the showdown between former PM Ivanishvili and the president.

The confrontation has abated slightly during the last month, but government members preferred not to attend the annual speech, which was held in the parliament building in Kutaisi, Georgia’s second largest city.

In his hour long speech, the president tried to maintain ‘golden mean’ principle, slightly criticizing the government but at the same time paying formal allegiance to the team spirit of the ruling Georgian Dream coalition, which nominated him for president and secured his win in the 2013 elections.

The president said that he is happy that, unlike its predecessor, the current government ‘listens to the people. That is a major achievement.’

But he also criticized the the current government’s personnel policy, especially in the staffing of the Prosecutor General’s Office.

“Questions regarding the politicization of the Prosecutor General’s Office should be removed once and for all […] To achieve our goals the reforms must be accompanied by an appropriate personnel policy, and high professional skills of people with an impeccable past as the prosecutors and as their chiefs,” Margvelashvili said.

Also Margvelashvili reminded the ruling coalition of its pledge to reform the election legislation and abolish the system of single mandate districts, so-called majoritarians, through which half members of the assembly were elected.

The president asked parliament to introduce a bill during the spring session to amendment legislation in order to abolish the majoritarian system.

“The sustainability of society is essential for a stable political system […] In other words, we need a European political system. The faults in the current system were outlined in the Georgian Dream election program. Among other amendments, the common opinion was to change the majoritarian election system,” Margvelashvili said.

Praise for the NGOs

Though the government was absent during his speech, representatives of the press and non-governmental organizations NGOs turned out in great numbers.

Margvelashvili stressed their importance in the democratic development of Georgia. This may be interpreted as a dig at the government and personally the current and past prime ministers, Irakli Garibashvili and Bidzina Ivanishvili, who have made critical remarks lately against the media and a handful of Tbilisi-based NGOs which they regard as too powerful.

“Everybody agrees that a vibrant civil society plays a vital role. We expect that representatives of civil society contribute more in building a modern, European state through dialogue with the government, offering solutions and substantiated criticism,” Margvelashvili said.

Georgia’s place in Europe was a major topic in the president’s speech.

“Historically and culturally we are Europe. Probably we have had even more merit [in this regard], because of geographical distance. We have had to protect European values in solitude,” Margvelashvili said.