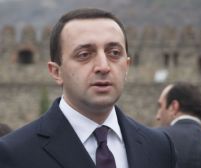 It’s a bit difficult to understand the opposition, they represent their own opposition, Georgian Prime Minister told Russia Today in an interview regarding the National Movement party.

According to Gharibashvili, the politicians from the National Movement, the party which ruled Georgia for nearly nine years until losing power a year ago, are acting contrary to their own people, citizens and country.

“In other words, they are doing nothing new. It’s very difficult to maintain healthy competition with them. There is no healthy criticism from them. I think they don’t at all understand the word ‘healthy’. Furthermore, they don’t understand the word ‘objective’. I would like to remind everyone that these people offered Georgian citizens a type of democracy which was a facade and built on lies. All of this was facade type. I have studied every sphere. Can you name one field where they have not done facade changes and facade reforms? Up to three hundred thousand people were objecting to their persecution. This is a disaster for me. For nine years three hundred thousand citizens of our country. I can’t accept all this calmly and without emotions,” Gharibashvili said.

Furthermore, the premier explained, he can’t accept criticism, sabotage and moral condemnation from them calmly.

“This is cynicism. This is my opinion of the current opposition. This is of course National Movement that I mean by opposition,” Gharibashvili said, according to Interpressnews.