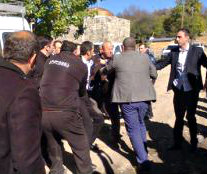 TBILISI, DFWatch–The beating of four Muslims by Georgian police may be brought up before the European Court of Human Rights after a human rights group in Georgia on Thursday filed a lawsuit at the Strasbourg court.

The four were detained by police during a village quarrel over a mosque in Mokhe near Adigeni in the south of Georgia in October 2014.

Education and Monitoring Center of Human Rights (EMC) claim they were subjected to violence psychological pressure during their arrest and in the detention facility, and accuse police officers of abusing their official powers during the protest that day.

Specifically, EMC claims Georgian police violated article 3, 8, 13 and 14 of the European Convention on Human Rights, which are about prohibition of discrimination, personal and family privacy rights and prohibition of torture, inhumane and insulting treatment.

The conflict began with a decision by the local municipality in Mokhe to demolish the ruins of a mosque. This led the Muslim community to organize a protest. The municipality wanted to turn the ruins into a culture center, while the Muslims wanted to hand the mosque over to the community. Fourteen people were arrested, all Muslims, during the clashes.

Four of them were subject to violence by law enforcement bodies, EMC writes.

“Hate speech on religious grounds was revealed on every level of the police measures,” the organization’s statement  reads.

The organization is bringing the case before the ECtHR after two years of trial in Georgia has not brought any actual results and the four who were detained.