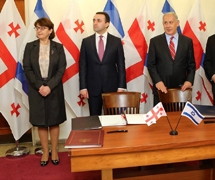 The meeting with Peres was about the good bilateral relations between the two countries and confirmed an intention to deepenrelations. They underlined the friendship between Georgian and Jewish people which was established during thousands of years.

The meeting with Netanyahu was about the future perspectives of relations, and regional and international issues.

After the meeting, a ceremony was held to sign a memorandum about establishing inter-governmental economic commission of Georgia and Israel, which was an initiative of the previous prime minister, Bidzina Ivanishvili. The document was signed by the foreign affairs ministers.

The first session of the economic commission was held in Israel and was chaired by the foreign ministers. During the session, a decision was made that the second session will be held next year.