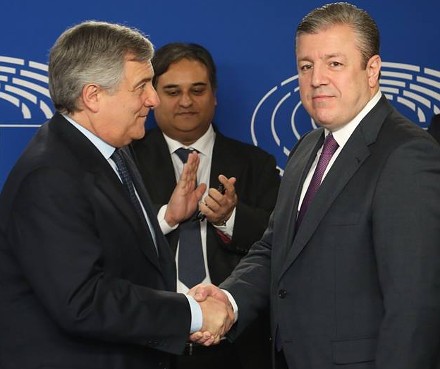 TBILISI, DFWatch–After years of negotiations, Georgia’s prime minister finally signed an agreement with the EU on Wednesday which gives his country’s citizens the right to visa-free travel to the Schengen area.

The visa waiver plan will be published in the EU journal on March 8 and enter into force on March 28.

The document pertaining to a new suspension mechanism was also signed on Wednesday. The mechanism became a topic last year after the visa waiver plan ran into difficulties due to fear in some western European countries of a potential flood wave of asylum seekers from Georgia. With the suspension mechanism, each individual member country will retain the right to halt visa-free arrivals  without first having to ask the EU, if certain conditions should arise.

From March 28, Georgian citizens can enter the vast borderless Schengen area for a period of up to 90 days within a 180 day period without applying for a visa. The only requirement is having the new type of biometric passport.

The Schengen area consists of all EU member countries except the United Kingdom and Ireland, and in addition a few countries that are not EU members, including Switzerland and Norway.