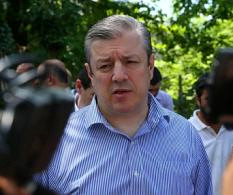 TBILISI, DFWatch–The Georgian government is planning to build a new road to the mountainous Tusheti region in the northeast of the country.

The current road to Tusheti is bumpy and becomes non-traversable in winter, during which time the only access is by helicopter.

A tender has been announced for building a new road.

“This will be ‘a modern road of European standards,” Prime Minister Giorgi Kvirikashvili said Thursday as he visited Tusheti to participate in the traditional Tushetoba festival.

The new Tusheti route is part of a government effort to better connect Georgia’s mountainous regions.

“We aim for every tourist to be able to securely come here to Tusheti – and faster,” Kvirikashvili said.

Currently, the only road to Tusheti runs from the village Pshaveli in the Telavi region to Omalo in Tusheti – a 72km drive. The road standard is average in the beginning, but becomes rocky from Stori Valley to the Abano Pass. There is a danger of landslides too. Even though the route is only 72km long, it takes many hours to drive.