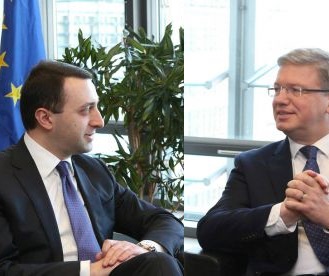 The two spoke about the ongoing reforms in Georgia and the country’s closer integration with Europe. Gharibashvili said Georgia is ready to fulfill its obligations, accelerate reforms and provide harmonization with European norms and strategies.

The meeting also dealt with cooperation between EU and Georgia, prospects for signing the Association Agreement with the EU, which Georgia approved at the Eastern partnership summit in Vilnius last fall but which must go through a ratification process before finally being signed. They expressed hope that signing the agreement will create a new reality in relations between the EU and Georgia.