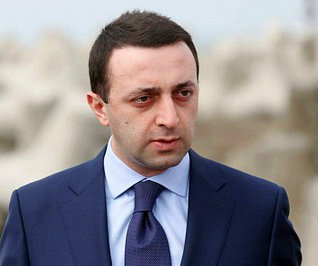 Prime Minister Irakli Gharibashvili claims a campaign to reign in illegal surveillance is an attempt to undermine the government. (Interpressnews.)

After the Saakashvili regime lost power in Georgia, several Tbilisi-based non-governmental organizations (NGOs) have revived a campaign that was active in the 2012 election campaign.

This time, they are fighting against illegal wiretapping. So far they have achieved the destruction of thousands of illegal recordings of people in compromising situations.

Now, the NGOs also want legislative guaranties to avoid that law enforcers are tempted to use illegally recorded material for blackmail again.

Moreover, one of the officials, Khvedelidze, who was deputy interior minister a few months ago, tried to use illegal surveillance for his own interests, and was fired for it.

The NGOs now demand a package of legislative changes that will ensure stricter punishment for illegal wiretapping and spying, and stricted control will be exerted on intrusive measures by the police during investigations. The NGOs have already suggested a law package to parliament.

Though this proposal was sent to parliament a year ago, it has not been discussed yet. Because of the delay, the NGOs resumed their campaign, called ‘This Affects You Too’ with the new added slogan ‘They Still Listen To Us’.

The government has not yet commented about the delay. On Thursday, Prime Minister Irakli Gharibashvili said that the campaign is ‘undermining the country’s image’ and added that the NGOs are engaging in anti-government activity together with ex-President Mikheil Saakashvili’s National Movement.

Gharibashvili explained that he ordered his advisor Mindia Janelidze to work on the draft law. The preparations are now finished and the prime minister called on parliament to pass the bill as soon as possible.

“We heard a rhetoric of a totalitarian government’s leader from the prime minister. This is how Putin talks about the civil sector,” said Nino Lomjaria, head of International Society for Fair Elections and Democracy (ISFED), one of the organizations that are part of ‘This Affects You Too’.

Lomjaria says the prime minister knows which organizations are participating in the campaign and that is not initiated by UNM, as the campaign was active two years ago too, when UNM was the ruling party.

Lasha Tughushi, Editor in Chief of the newspaper Rezonansi, is interested in who misled Gharibashvili about UNM’s link to the draft law against illegal wiretapping.

Tughushi is one of the coauthors of the draft law together with Zviad Koridze, Lika Sajaia and Shalva Shavgulidze. Initiator is the judicial committee in parliament. Tughushi said it was thoughtless by Gharibashvili to say that ‘This Affects You Too-They Still Listen To Us’ is dangerous for th egovernment’s interests.

“We did not start this campaign immediately after the change of government. We observed the discussion of the draft law for about a year and saw how the Interior Ministry blocked its adoption. When we were finally convinced that the government did not plan to change its practice, we started the campaign Affects You Too-They Still Listen To Us. We are ready for a constructive cooperation with the government, as we were last year,” Lomjaria said.

She thinks the PM’s statement is undermining the government, not the campaign.

Speaker of Parliament Davit Usupashvili said parliament is discussing the draft law and will adopt it by May 16.