Georgian PM blasts media for ‘hysteria’ about recruitment for IS

Georgian PM blasts media for ‘hysteria’ about recruitment for IS 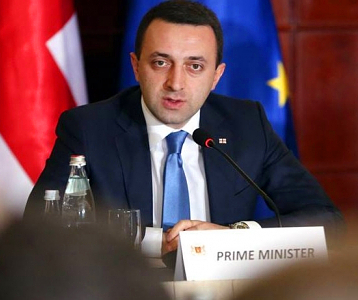 TBILISI, DFWatch–Georgian Prime Minister Irakli Garibashvili scolded the media on Tuesday for their coverage of Pankisi youth who become radicalized and join Islamic State in Syria.

The media have shown an ‘unnatural hysteria’ about this problem, which is a matter of national security, harming the country’s mage, the PM reprimanded them.

For several years there have been reports of young men from Pankisi, an ethnic Chechen valley in the north of Georgia, leaving for Syria or Iraq to become Islamist fighters. There are allegations that the youth are being recruited by someone, and locals have demonstrated to ask the government to put an end to it.

Further controversy was caused by news that two school boys, one of them only 16 years old, managed to cross the border into Turkey and on to Syria, from where they sent home a photo of themselves in military fatigues clutching machine guns in front of a banner of the Islamic State.

Prime Minister Garibashvili, who has addressed the problem several times before, said Tuesday that the previous government’s attitude towards people in Pankisi was ‘totally indifferent.’

“We have changed the approach, and only two or three people [in Pankisi Gorge] are trying to recruit youth [to go] to Syria. Police will take care of this, and I know that they are working on it.”

Currently, at least ten Georgians from Pankisi are reported to have died in the Syria war. Most who have left have been young, and they have left unexpectedly.

Although terrorism is a crime in Georgia, there is no punishment for IS fighters who return to Georgia. But a new law is being prepared which will make it a punishable offense to be a member of a terrorist organization, or an illegal paramilitary group, in another country. It will also be punishable to participate in such groups even without status as member, or take part in exercises with them, produce propaganda for, make calls in support of, or try to recruit for terrorist groups like Islamic State.

It will also be a crime to attempt to leave Georgia with a goal to join such groups or organizations.

The bill will add a new article to the Criminal Code and violations of the first part, about joining or training with terrorist groups or illegal paramilitary organization, may be punished by from five to ten years in prison.

To make calls in support of, or propaganda, or try to recruit for such groups will be punished by up to two years in jail.

The bill was approved by government at a session on December 18, 2014 and had its first reading in parliament last Wednesday. It will be mostly relevant for Georgian citizens who plan to join the war in Syria and Iraq.

Justice Minister Thea Tsulukiani said on Tuesday that parliament is considering the reform and that another measure is to create economic development in Pankisi and the economy and finance ministries are working on this.

EU Ambassador to Georgia Janos Herman said the same day that the EU wants to support Pankisi economically. He said the process of implementing the association agreement Georgia signed with the EU last year would have positive repercussions for the economic development of such regions. If jobs are created, people who live there will not want to go [to Syria] anymore, he suggested.