Georgian parliament to consider prosecution of one of their own

Georgian parliament to consider prosecution of one of their own 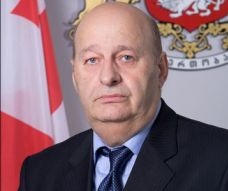 TBILISI, DFWatch–The Prosecutor’s Office in Georgia has asked parliament for its consent to start a criminal prosecution against one  parliamentarian, Roland Akhalaia.

Parliament will announce its decision on Monday.

MP Roland Akhalaia is father of Data and Bacho Akhalaia, brothers who held high positions in law enforcement agencies during the years Saakashvili was president. Bacho Akhalaia was first minister of corrections, then defense and later interior minister.

They have been linked to several scandals about government representatives abusing their power for personal benefit. Available information shows they personally abused prisoners and soldiers physically.

Data Akhalaia was head of the Constitutional Security Department (CSD). He is currently wanted by Interpol. He and his brother Bacho are both charged; in some of charges they were found guilty and other parts of the charges, the trials continue.

Roland Akhalaia was a district prosecutor of Samegrelo-Zemo Svaneti and some of the residents living in that area expressed discontent about him.

Roland Akhalaia was summoned to the Prosecutor’s Office as a witness in December 2012, but avoided going there himself.

On Friday, the Prosecutor’s Office said it wants to charge Roland Akhalaia with abuse of power.

It said in a statement that he demanded money from two families in exchange for a plea bargain, 150 000 lari (about USD 90 000) and 60 000 lari (about USD 37 000), respectively, to be deposited into the bank account of his relative, a businessman. “This money was entirely spent on commercial goals of that firm,” the statement says.

Akhalaia considers the accusation a provocation and claims that his family is being pressured by the Prosecutor’s Office in order to produce testimonies against ex-President Mikheil Saakashvili.

The Prosecutor’s Office claims that it does not have a right to charge Roland Akhalaia without parliament’s consent to start a criminal prosecution. This is regulated by the Criminal Procedure Code, but is not mentioned in Parliament regulation, which creates some misunderstanding.

According to parliament regulation, it requires parliament’s consent to arrest an MP or to search his or her car, flat, working place or person, but according to the Constitution, permission is not necessary to charge an MP.

A group of lawyers has started looking into the issue.